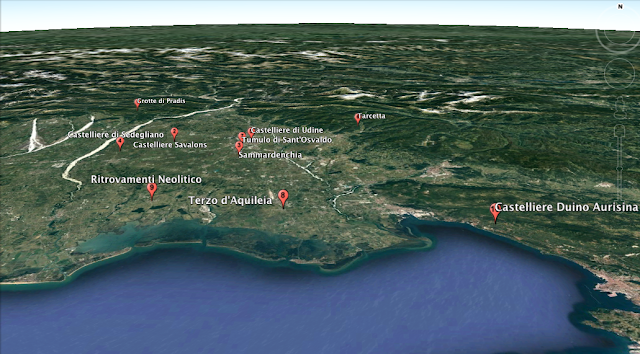 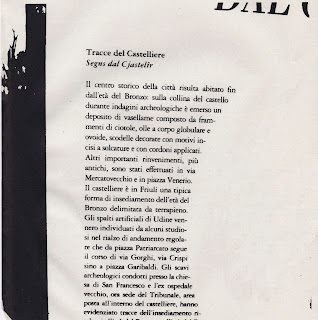 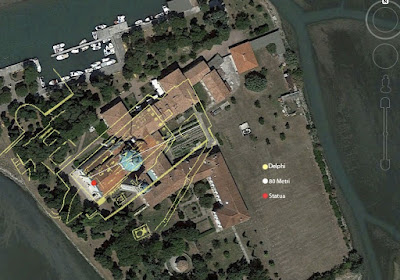 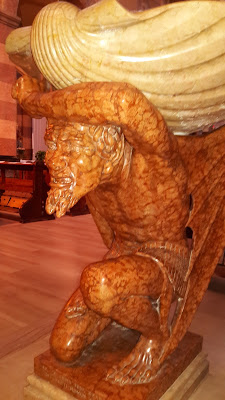 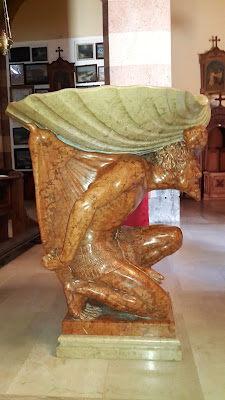 Apollo-Belenus a Barbana, Grado IT 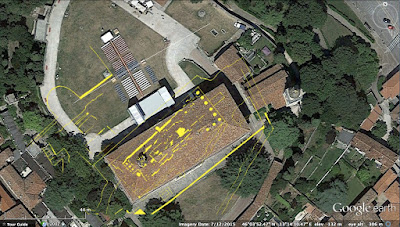 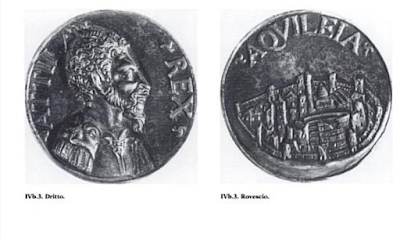 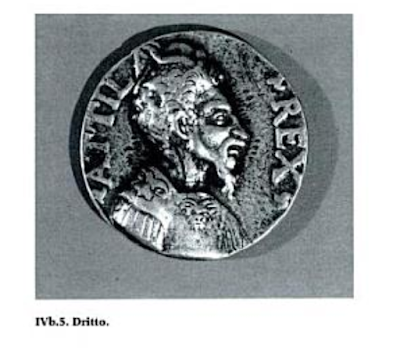 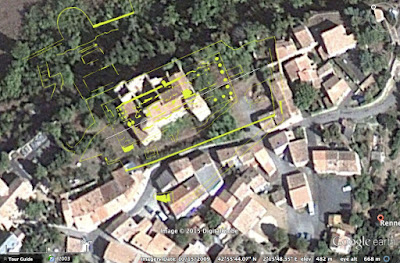 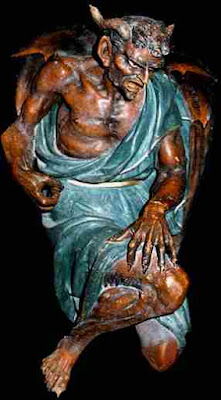 The God of the Witches - Margaret Murray 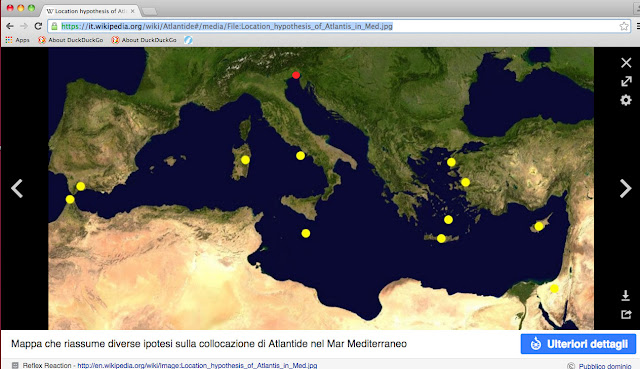 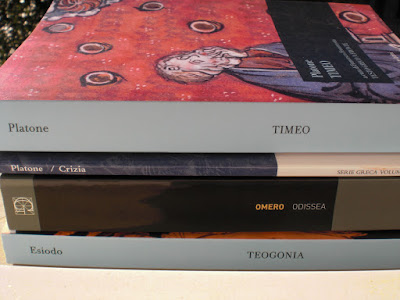 The Atlantic and the Adriatic

The Adriatic Sea takes it’s name from the city of Adria which was founded circa 800 BC and established as a port on the sea around 500 BC (source; Romolo A. Staccioli "Gli Etruschi un popolo tar mito e realta'"). What was then the name of this sea for Homer and Hesiod whom were writing in 900 BC, a period previous to the founding of Adria. I believe that Homer when speaking of the Atlantic Ocean is actually referring to the Adriatic Sea. If there were truly an advanced civilization at war with Greece as described in Timaeus by Critias it was probably mentioned by Homer in the Odyssey when Odysseus made his journey in the Mediterranean. I suggest to the readers of this blog to read not only Plato's Timaeus and in particular when Critias introduces Atlantis and later on where he describes Atlantis in detail but also to re-read The Odyssey.
In Timaeus there's an interesting description that the Egyptian priests made of the Atlantic Ocean to Solon (600 BC);

"…starting from a distant point in the Atlantic Ocean, was insolently advancing to attack the whole of Europe, and Asia to boot. For the ocean there was at that time navigable; for in front of the mouth which you Greeks call, as you say, 'the pillars of Heracles, there lay an island which was larger than Libya and Asia together; and it was possible for the travelers of that time to cross from it to the other islands, and from the islands to the whole of the continent over against them which encompasses that veritable ocean. For all that we have here, lying within the mouth of which we speak, is evidently a haven having a narrow entrance; but that yonder is a real ocean, and the land surrounding it may most rightly be called, in the fullest and truest sense, a continent. Now in this island of Atlantis there existed a confederation of kings…"

The description is somewhat confusing, but apparently the Atlantic Ocean that the Egyptian priest is talking about was surrounded by a continent and the island of Atlantis has given it’s name to the sea in front of it. My interpretation is that the Atlantic Ocean is the Adriatic Sea not only for Plato (420 BC) and Solon (600 BC), but especially for Homer (900 BC). When reading The Odyssey it is interesting to note that it is possible to follow the journey of Odysseus in the Aegean sea because the islands and places mentioned are real, such as Ithaca, Pylos, Samos, Zakynthos, and Dulichium, but at some point in the journey of Odysseus he deviates due to the wrath of Poseidon into the Atlantic Ocean where Ulysses shipwrecks and meets the Pheacians who will help him return to their land. There are many similarities between Plato's Atlantis and the story of the Pheacians of Homer and I'm going to list them in the next post. It seems strange that the Adriatic Sea was completely ignored by the Greeks and the Atlantic Ocean was often mentioned even though the Adriatic sea is much closer. I think it is reasonable to ask whether Homer in 900 BC was even aware of the existence of the Atlantic Ocean or if it is more plausible that it was simply the name he had for what is actually the Adriatic Sea. If my theory is correct the Adriatic Sea was known as the “Atlantic Ocean” to the ancient Greeks based on its proximity to Atlantis which I believe was located in North East Italy.

Translated from Italian by L. Morrongiello

The Atlantic Ocean, the rectangular shape, the circles and the mountain

"…as is recorded, between the dwellers beyond the pillars of Heracles and all that dwelt within them; which war we have now to relate in detail. It was stated that this city of ours was in command of the one side and fought through the whole of the war, and in command of the other side were the kings of the island of Atlantis, which we said was an island larger than Libya and Asia once upon a time, but now lies sunk by earthquakes and has created a barrier of impassable mud…" 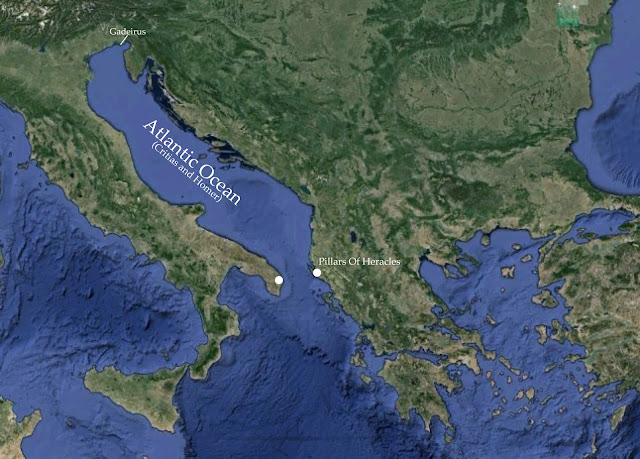 "...according to the account, the whole region rose sheer out of the sea to a great height, but the part about the city was all a smooth plain, enclosing it round about, and being itself encircled by mountains which stretched as far as to the sea; and this plain had a level surface and was as a whole rectangular in shape, being 3000 stades long on either side and 2000 stades wide at its center, reckoning upwards from the sea. And this region,

[118b] all along the island, faced towards the South and was sheltered from the Northern blasts. And the mountains which surrounded it were at that time celebrated as surpassing all that now exist in number…." 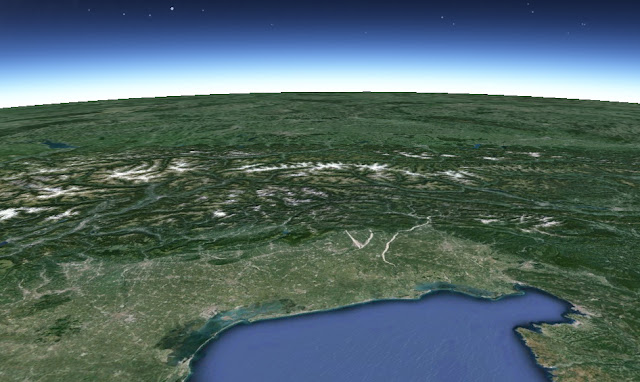 "...And they had built the palace at the very beginning where the settlement was first made by their God2 and their ancestors; and as each king received it from his predecessor, he added to its adornment

[115d] and did all he could to surpass the king before him, until finally they made of it an abode amazing to behold for the magnitude and beauty of its workmanship. For, beginning at the sea, they bored a channel right through to the outermost circle, which was three plethra in breadth, one hundred feet in depth, and fifty stades in length; and thus they made the entrance to it from the sea like that to a harbor by opening out a mouth large enough for the greatest ships to sail through. Moreover, through the circles of land,

[115e] which divided those of sea, over against the bridges they opened out a channel leading from circle to circle, large enough to give passage to a single trireme; and this they roofed over above so that the sea-way was subterranean; for the lips of the   were raised a sufficient height above the level of the sea. The greatest of the circles into which a boring was made for the sea was three stades in breadth, and the circle of land next to it was of equal breadth; and of the second pair of circles that of water was two stades in breadth and that of dry land equal again to the preceding one of water; and the circle which ran round the central island itself was of a stade's breadth. And this island,

[116a] wherein stood the royal palace, was of five stades in diameter. Now the island and the circles and the bridge, which was a plethrum in breadth, they encompassed round about, on this side and on that, with a wall of stone; and upon the bridges on each side, over against the passages for the sea, they erected towers and gates. And the stone they quarried beneath the central island all round, and from beneath the outer and inner circles, some of it being white, some black 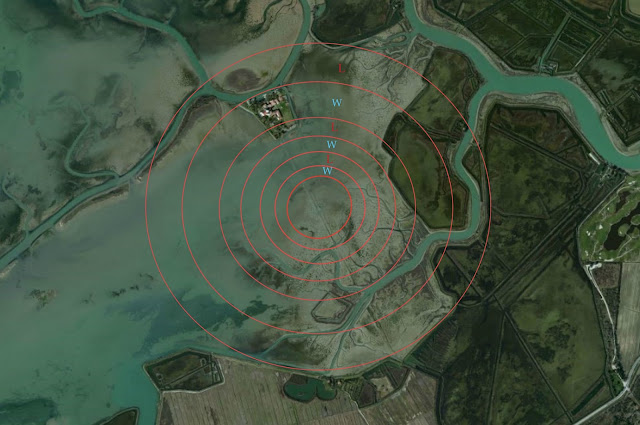 "...Bordering on the sea and extending through the center of the whole island there was a plain, which is said to have been the fairest of all plains and highly fertile; and, moreover, near the plain, over against its center, at a distance of about 50 stades, there stood a mountain that was low on all sides…" 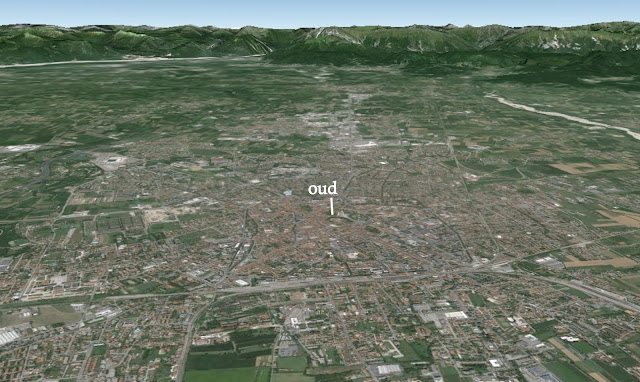